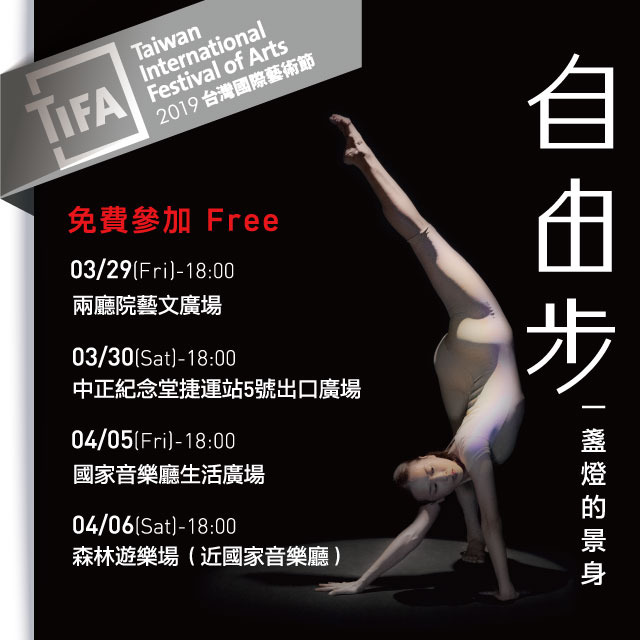 Under a street lamp, freely encounter with FreeSteps

SU Wei-chia: “Believing what you see with your own eyes makes everything very simple.”

FreeSteps – NiNi is SU Wei-chia’s work at the sixth year in his 10-year choreography project, in which

he walks out of the theater and comes near you and me. It means that you will encounter dancers

under a street lamp in the city, where all of the elements, including the temperature, lighting and

landscape at that time as well as people like us in the surroundings, become materials for the dancers’

creation. Their physical bodies may be stretching or curling up or dancing in merriment or in pains. The

variation of physical quality, the revolving of dancing steps, and shadows on the bodies left by light all

contribute to shaping a physical sculpture.

because it is simply a struggle between dancing steps and physical bodies. Please bring along with you the

nobody but you at the minute of inspiration.

Looking for steps in the pleasure of ecstasy! Founded in 2004, HORSE has been praised by the New York Times as “a charming and imaginative […] dance troupe from Taiwan” and been awarded the Taishin Arts Award and the first prize of Kurt-Joos-Preis, Germany.

Co-founder of the HORSE, SU Wei-chia’s Freesteps has been described by a French critic as “a performance that cultivates aesthetics to the extreme.”

●Pre-talk: 3/29(Fri)、3/30(Sat) 30 minutes before the performance at the corridor of National Theater Gate 6, Forest Land No.5 (near MRT Chiang Kai-shek Memorial Hall Station)

●utes with an intermission.